One thing leads to another: the East Alley project area balloons

My fiancée Pam and I laid the foundation for Spring in Our Steps, last November. However, due to our conflicting schedules, I was the only one able to make it into the field. Nonetheless, we planned a tour of East Alley’s entirety and surrounding neglect, a couple weekends ago. What we found was quite startling, adding much more area and additional focal points to our East Alley project site. Nonetheless, we continued work on the alley itself. I clawed through the accumulated soil from foliage decomposition to uncover and pluck weed roots. Pam trawled through those areas for loose post-consumer waste. This coming Friday, I will sweep some of that rich soil away from the crease of the alley and the retaining wall. If anyone would like to assist, just drop a line!

Our expedition route for January 18th

We were cajoled to explore more of the neighborhood, after a friend, city steps aficionado, and East Alley-abutting resident alerted us that a retaining wall collapsed in the alleyway. Successive days of torrential rain wreaks havoc on our soils in Cincinnati, causing millions of dollars in damages each year. It is clear that, though we will be able to make something beautiful and functional of East Alley, we will need the City’s help to tend to collapse in a timely manner. My hope is that we will be able to garner enough support through the initiative to highlight new areas of necessary rehabilitation: one of our primary principles for each of our projects.

A retaining wall collapsed along East Alley, leaving more than a two-team crew can handle

A new garage door found along the alley, nearest to Thill St...but surely not a safe drive to and from

As I mentioned earlier, our East Alley project site area has grown substantially! During our tour of the neighborhood, we uncovered another portion of St. Joe Street, on the opposite of Loth Street. On CAGIS Online, you can make out the right-of-way of this section, which continues up to Rice Street. However, due to the steep topography, a perpendicular staircase leads the unlikely pedestrian up to a mostly undocumented North Wendell Alley. Surprisingly, the staircase is in great condition. Under the age-telling layers of garbage along this section of St. Joe Street, Pam and I uncovered another alley (assumed to be South Wendell Alley), which led behind homes on the east side of Loth Street. The only clue was a small, uncovered section of brick-clad earth, after climbing up a building foundation. 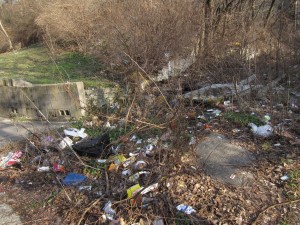 Undoubtedly, these city steps would be open, if it were safe walking *to* and *from* them... 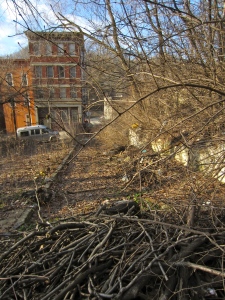 The invisible intersection of St. Joe St. and Wendell Al., looking out toward Vine St.

A cleanup of this proportion will need much manpower and womanpower alike! But the visible results will accomplish so much more for this isolated, stagnated community.