The journey of the past two weeks has been wonderful. It would be foolish not to recapitulate and commend the efforts, during this period.  We currently have two main sites: St. Joe Street/Wendell Alley and Peete Alley/Peete Street Steps/Rice Street Steps. Both were carefully selected, based on their neighborhood contexts. We believe that their remediation will assist to rejuvenate interest in those respective areas. It is all about community connections. By that, I mean two things. Certainly, we want to reconnect topographically isolated sections of neighborhoods. But we also aim to connect with community folks who share in our vision. I will divulge those experiences and interactions here. 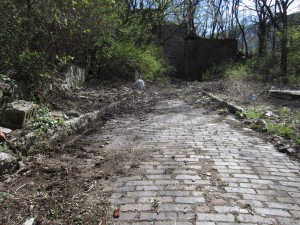 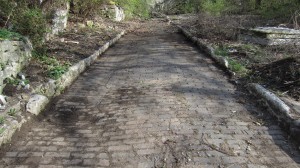 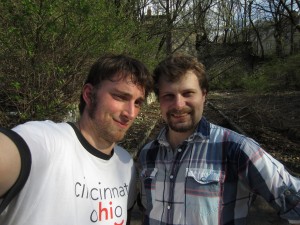 Our second outing to St. Joe Street in Mt. Auburn had high expectations for volunteerism, but we weren’t quite ready to match that expectation with fliers, outreach, and other ways of reaching out. Nonetheless, we made the best of it and pushed onward. Ian Monk and I spent the day progressing nearer to Wendell Alley from Loth Street. The primary objective was to clear the curb line of weeds. Doing so, we feel, gave a clean look to the site–albeit, backbreaking. After discovering the history of the 2200 Loth Street lot–which we will divulge in an upcoming post–we became interested in clearing the edge of the left retaining wall of stones and bricks. I think the results speak for themselves.

We absolutely need more volunteers for the St. Joe Street site. Our ambitions reach as far as the North Wendell Alley Steps and beyond, eventually seeking a work order from Public Services for a new hand railing. We also would like to clear out South Wendell Alley, at some point, but this is a low priority for now. Just making it to the alley, with a few more volunteer hands, would help us immensely. Several individuals have expressed directed interest at performing work on hillside steps, which we would love to have join our efforts. We recognize that this site is not as high profile as the Peete Alley site, but the value a cleaner, safer St. Joe site would bring to the Jerusalem area of Mt. Auburn could be immense. 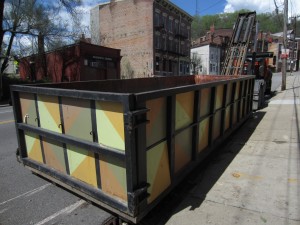 One of two SuperCans, this one placed at Peete Alley at Vine 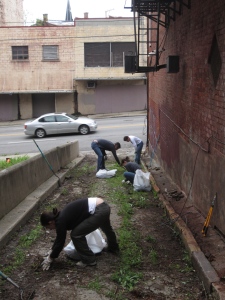 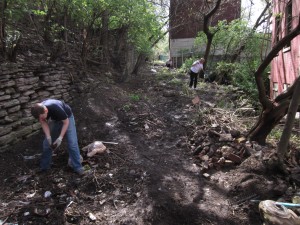 Part of the SiOS crew cleaning up the back portion of Peete Alley. Much work to be done! 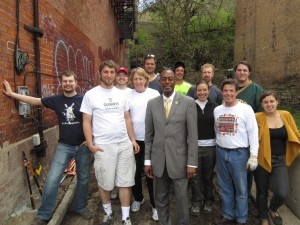 At lunchtime, Mayor Mark Mallory stopped by to pose with the SiOS crew at Peete Alley. 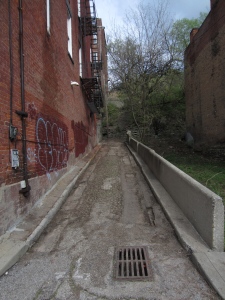 From 9am to 5pm, Peete Alley was transformed up to the rear curve. Work is not done but it's looking great! 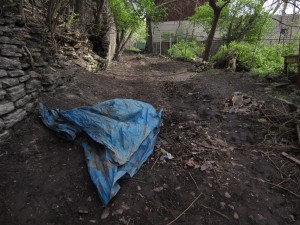 5pm: The back portion of Peete Alley is devoid of overgrowth. Next step: uncovering those cobblestones!

The flier that Ian Monk designed seemed to be the perfect introduction to our Peete Alley site. It included the progress we made on St. Joe Street, from mid-February to mid-March. It also showed our wonderful partners in Keep Cincinnati Beautiful, Coffee Emporium, Park + Vine, and Naked Pizza. Each of them supplied tools, food, and drink that made our outing entirely cheery. The night before, I messaged Mayor Mark Mallory, making him abreast of our Saturday morning cleanup. We certainly want our councilpersons to be aware of Spring in Our Steps. Not only did Mister Mayor show, but we got a group photo with him. His sentiments: “Keep up the great work.” I have confidence that this was the first alleyway that a Cincinnati mayor had visited. Perhaps we should get a plaque…

Oh, and the volunteers! We had a total of fifteen volunteers come out Peete Alley to sweat, dig, and laugh. Keep Cincinnati Beautiful supplied us with two SuperCans, essentially large dumpsters into which we could dump large amounts of overgrowth and litter. A man I met outside the Clerk of Courts office, the previous day, came with his daughter and brought a wheelbarrow, living just a short walk away on McMicken Avenue . The hours we had it at our disposal were much easier than the hours we did not, so we will be looking to obtain one for future cleanups. Another man stopped by the site, by the name of Jeff. He is a man who lives on Loth Street, down the way from our St. Joe Street site. His brief visit gave us great insight about the neighborhood, it’s dealings with dumping and suspicious activity. It is these encounters from area residents that make our initiative so much more fruitful.

Achievement: two half-filled SuperCans with litter, soil, and overgrowth. One bag of recyclables.