Located between West McMillan and Warner Streets, in the heart of Clifton Heights, this alley serves as a spine that bisects the neighborhood. For some, Schorr Alley is either never considered or an afterthought; for others, it carries a reputation of being poorly lit and harboring suspicious activity. Last addressed in 2008, for the Great American Cleanup, the alley was described in the CUF Newsletter as having been, “a small city street that was littered with years of debris, stones, trash, overgrown weeds, and yard waste dumping.”  The southern end is nearly impassable, due to high weeds, broken glass, and hidden refuse. Therefore, its southbound, one-way designation from Warner Street is meaningless. Residents along Wheeler Street and West Clifton Avenue must drive the wrong way to leave home.

Length: approx. 1100 feet
Alley right-of-way: 10 feet
Cross streets: None
Substrate/pavement type: Brick, paved over with asphalt for most of its northern half
Notable challenges: Its length, lack of interruptions, and parking restrictions at both ends, make it impossible to place a dumpster on nearby public property for cleanups. Three street lamps light the alley at night, while the middle lamp is motion activated. 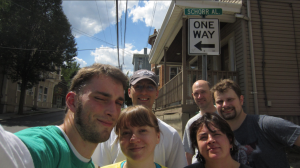 Recent activity: August 18th. Seven dedicated volunteers weeded the alley, trimmed overhanging branches, and swept most of its length. A cleanup opportunity is set for September 22nd, where volunteers will break down and bag branches and refuse. Keep Cincinnati Beautiful has agreed to coordinate removal of the bags afterward.

Opportunities for improvement: Schorr Alley is wonderfully situated between the core of Clifton Heights and its student housing, and the popular Clifton Heights Business District. The University of Cincinnati is less than two blocks away from the northern end of Schorr Alley. These factors give great opportunities for volunteerism and integration of the alley with student/community-led, homegrown creativity.

We envision Schorr Alley as something like a souk, the narrow and bustling street market commonly held in Middle Eastern countries. Schorr Alley’s anchors–the business district and the neighborhood–can give the corridor much needed support for such a marketplace. Locally-produced foods and soft goods, crafts, art, musicians scattered throughout–something for everyone. And even a few visitors could make the market appear to be bustling, thereby attracting more onlookers. Souks are essentially “alley markets” in countries like Morocco and Israel. Souks are not common in the United States, particularly the alleys with widths found in Cincinnati. We seek to change that. In Schorr Alley, vendor booths would have to shift from side to side, since it is 10 feet wide, in order to keep it navigable. However, many sidewalks in Over-the-Rhine and Downtown possess the same width.

This entry was posted on September 16, 2012 by C. Huelsman in Alleys and tagged alley, clifton heights, marketplace, schorr alley, souk.