I lend my most sincere apologies for not following the proclamation of daily posts, as I had ambitiously planned. Sickness and a family emergency quickly followed those plans, the latter of which brought me to Cleveland. During some planned personal time, I roamed the streets of Cleveland, Ohio. The hotel at which I have stayed, for a full week, has a heavily used alley behind it. A short walk, from the area around Cleveland State University to Downtown, will uncover a handful of oddly configured alleys that follow the irregular street patterns dictated by the lakefront, railways, and Flats. For this special post, I highlight alleys of the Campus District, Downtown, Ohio City and Tremont.

Campus District (within and adjacent to Downtown)

The few alleys in the Campus District of Downtown Cleveland are survivors amongst the superblock development of Cleveland State University (CSU). They connect the university area to Playhouse Square, providing access primarily to surface parking lots and loading areas. I would consider them to be heavily used, at least between the districts. The natural, brick pavers have been covered with asphalt, and present a challenge for pedestrians after a heavy rain.

Brownell Court leads into Swingos Court, eastward, running parallel to Euclid Avenue. As one walks down Brownell to East 13th Street, the red brick substrate begins to show itself. The landscape becomes more dense. Many bridges connect buildings over alleys. The red brick begins to stand out among the muted greys and browns typically found at the rear of aging structures. As I found out later, bright red brick is a constant in Cleveland. This was a surprise to me, considering the materials found in Cincinnati’s alleys range from dark red and brown bricks to white Belgian Block to cobblestone and more. 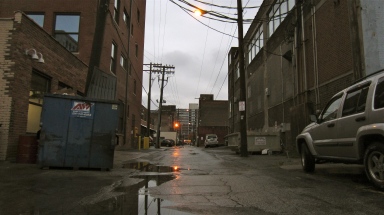 Brownell Court, heading west from East 13th Street and the US Bank Tower.

Many views from the convergence of East 12th Place and Brownell Court, with towering brick buildings on all sides.

The boundaries of Downtown Cleveland jogs throughout the streets near CSU, stretching as far as East 18th Street at Euclid, and farther east to include the school. The area of Cleveland from Playhouse Square (around West 9th Street) and westward takes on a more dominant demeanor. Many alleys you see may not show up on mapping applications, as they are often access drives to parking garages or loading docks for office buildings. Nonetheless, they create some interesting breaks between blocks, piquing your curiosity about what deep within the city block. Most of these private alleys have been long since paved with asphalt, not at all unlike the partial alleys that provide access to single, large buildings in the downtown core of Cincinnati (think Aronoff Center, Government Place near the County Courthouse, the drive between Federal Reserve Bank and its adjacent plaza).

There are bound to be some treasures upon happenstance in Downtown Cleveland, but many have been eliminated through the development of entire city blocks. One such survivor among alleys is private corridor at Public Square, near the intersection of South Roadway and East Roadway. If anything, this downtown alley provides an untraditional viewshed of multi-generational archetypes of the great American city. 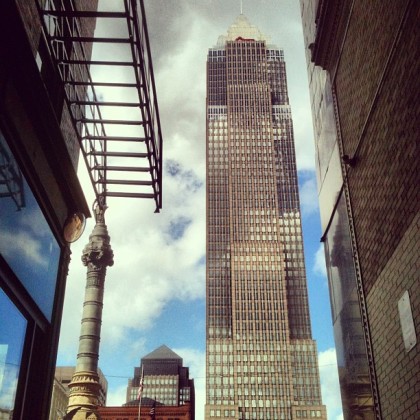 Next up: We wil explore the alleys of Cleveland’s Tremont and Ohio City neighborhoods, historic hubs of eclecticism.