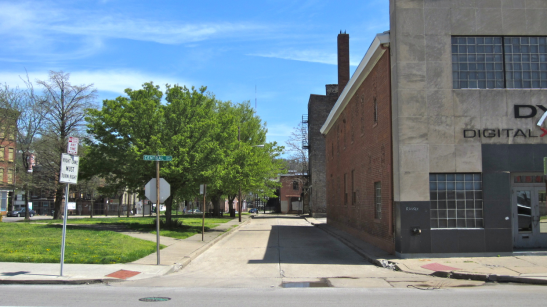 Consideration for the preservation of Cincinnati’s alleyways should be taken seriously, as the provision of linear, pedestrian scaled, public right-of-way rarely returns after it is ceded. However, not all alleys are valued equally, and their viability varied based on neighborhood context. Some alleys are used primarily for rear property access, while others have evolved as pedestrian walkways. Often, we do not know in the present what the needs of the future will be, though many stakeholders with specific motives claim to have access to oracles. As value returns to our urban neighborhoods, coming up with answers *should* become more difficult, not easier.

In a letter dated April 9th, 2013, Chatfield College (1544-1548 Central Parkway) relayed a request to City of Cincinnati Real Estate Manager Thomas Krumb to vacate or sell a portion of Kemp Alley. Located between West Liberty and Wade Streets in Over-the-Rhine, Kemp Alley, and the perpendicular Fall Alley, once served as access roads for home on those respective streets. The alleys became less critical when Liberty Street was widened in 1959, eliminating half of Kemp Alley’s abutting properties. Subsequent blows included widespread vacancies, which now net 0% occupancy on the 200 block of Wade Street.

Krumb called on Over-the-Rhine Community Council President Peter Hames to solicit feedback on his behalf, regarding the sale of a section of Kemp Alley, between 1544 Central Parkway and Liberty Street. The sale would enable Chatfield College to expand their growing educational campus to the north. The deadline for public feedback of the request for closure is June 26th, 2013.

Although Kemp Alley does not currently have optimal housing density abutting its path, or nearby street activity to generate feedback of nearby users, its right-of-way is still important to the future development of Over-the-Rhine. Consider the following observations, which strive to examine long-term impacts of the elimination of this section of the alley for the use of Chatfield College.

1. Dead end alleys are forbidden in Cincinnati’s Rules and Regulations for the Subdivision of Land, and lead to further disinvestment.

The City currently prohibits dead end alleys, but that is not to mean that it has not vacated alleys before. Brackett Alley, located between Walnut and Clay Streets from East 12th Street is a dead end alley. It serves no current purpose than as a dumping site and a public restroom. Other dead end alleys, such as Coral Alley (between Clay and Main in Over-the-Rhine), North Wendell Alley (bisecting Loth and Rice Streets in Mt. Auburn, north of the public stairway at St. Joe Street), and Milo Alley (between Porter Elementary School’s parking lot and Clark Street in the West End) are all magnets for public dumping. [Other examples include Bates Alley at I-75 in Camp Washington, Bunker Alley at Liberty in Over-the-Rhine, etc.]

Furthermore, dead end alleys, where there is not adequate space for a turnaround, do not include the provision for reasonable vehicular access. Current dead end alleys are overgrown to the extent that vehicles have no access to the rear of properties, and the subsequent neglect has reduced property values. Kemp Alley is about 16 feet wide, likely widened from its original 10 feet width. By no means does the concrete paving of Kemp Alley contribute to the neighborhood’s historical context, but its expanded width provides more potential to future uses in the area. Conversely, concurrently performing a road diet of Kemp Alley would net more valuable square footage for private development.

2. The Brewery District Master Plan calls on the City to “study the feasibility of a ‘road diet’ on Liberty Street between Central Parkway and Sycamore Street.”

The Brewery District Master Plan includes recommendations that will restore much of the private land on south side of Liberty Street, as well as the implementation of Complete Streets along the roadway (bike facilities, lane reductions, improvements to intersections, streetscape improvements, etc.). Premature consolidation of land at Kemp Alley and Central Parkway will supersede conclusions from the Liberty Street study. It will not only create a dead end at Kemp Alley and the rear lot of 209 West Liberty, but it will likely reduce the viability of investment along Liberty Street during construction phases. For instance, rear storage of trash facilities and back door deliveries will not be possible for development on Liberty, and thereby detract from the walkable nature planned for the corridor. When, not if, the residential structures on Wade become targets for renovation, development plans will be hard pressed to find solutions for resident parking. Access to Kemp Alley from Central Parkway is an asset for that development outlook.

Expansion by Chatfield College into Kemp Alley and the city park will also create challenges, when construction commences along the south side of Liberty. We have already seen this occur with Crossroads Health Center at Vine and Liberty. Though this is a relatively minor consequence, no development plans or proposals have been filed by Chatfield College. They are putting the horse before the cart, by requesting a sale of the Kemp Alley portion before development assessments have concluded.

Taking a roadway, alley, or sidewalk, and transferring it to private hands, indubitably never makes its way back to a public benefit. We have all seen public stairways and alleys closed, and later disappear entirely, for the benefit of private enterprise. Some development projects don’t come to fruition, such as in the case of the 1700 block of Hughes Street, from Schiller to Mulberry. Kemp Alley is located prominently, and its partial elimination will create more development challenges for others, while only benefiting Chatfield College’s plans for physical expansion.

Although Kemp Alley does not resemble the beauty of many other alleys we have documented in Over-the-Rhine, it serves as a reminder that we should tread carefully, before making any knee-jerk decisions about seemingly insignificant space. It will be interesting to see what the proposed Liberty Street Road Diet study concludes. Let’s not allow a rushed expansion project to shake up a development plan with greater neighborhood foresight.

UPDATE: Over-the-Rhine Community Council duly reflects the stance expressed in my letter, dated June 25th, 2013, to defer closure and sale of Kemp Alley until multiple results may present themselves. This is a small but important achievement, and I hope that the appropriate decision is made by the City’s Real Estate Division.